You are here: Home / Archives for Tangleberry Diaries

THE SKOLLIE WHO LOVED ME 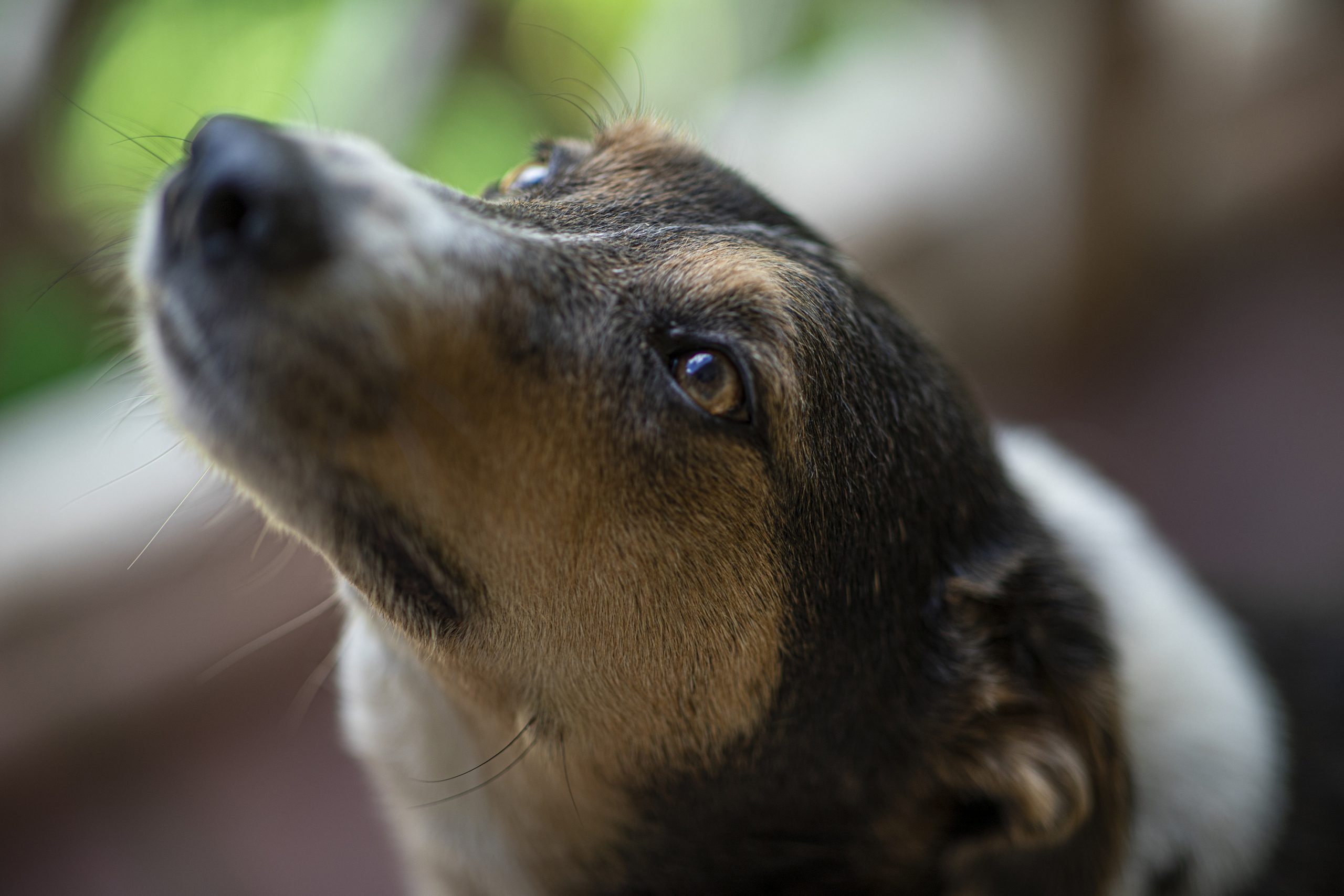 It was the first time in my life I cried. A true genuine cry where my soul yearned for Sage to come back to me — kisses on my face when she wanted to show her love. I sometimes cry watching movies, but that’s not the same. The orchestra strings pluck at my heart. And the French horns lower me into an emotional void full of heartache. The conductor is the instigator. This time no orchestra — just real life. Death wrapped with wrenched emotional loss. So close it beats my heart with anxiety.

This cry was different — it hurt. It hurt so badly I had a miserable night of emotional anguish filled with regret. Regret seems to travel hand in hand with emotional loss; all those ‘I wish I had done this and done that’ with Sage. The tears continued night and day. There would be so many moments throughout the day that my heart would go limp. When I slept only images of our shared moments appeared. The night became darkness with blurry eyelids. Eventually as the pain started to subside — it had to, I was dysfunctional; I started seeing Sage. Imagining her in usual places out of the corner of my eyes. Sniffing amongst the bushes for a morsel; hopping through blades of grass surrounded with singing insects. Ah! She pauses, sniffs the air; hears a distraction; it’s something. A goblin come to invade our home. She barks, sure it’s the demon only she could see.

Maybe she is a ghost now, a wandering spirit? When other dogs bark I only hear her voice. This convinces me her soul is nearby. When I work at my desk my furry friend would come by for a cuddle. But it wasn’t my furry friend Sage. My hands did not smell of old wood mixed with fresh grass and some unimaginable mound of earth she chose to roll it. It would be Zeus, come for his many daily head massages; who’d smell of a fresh ball of wool rolled in dried grass. Or Katie to have her chin tickled and her back rubbed. But the image of my loss would be to great and the unimaginable mound of earth Sage rolled in would come back. 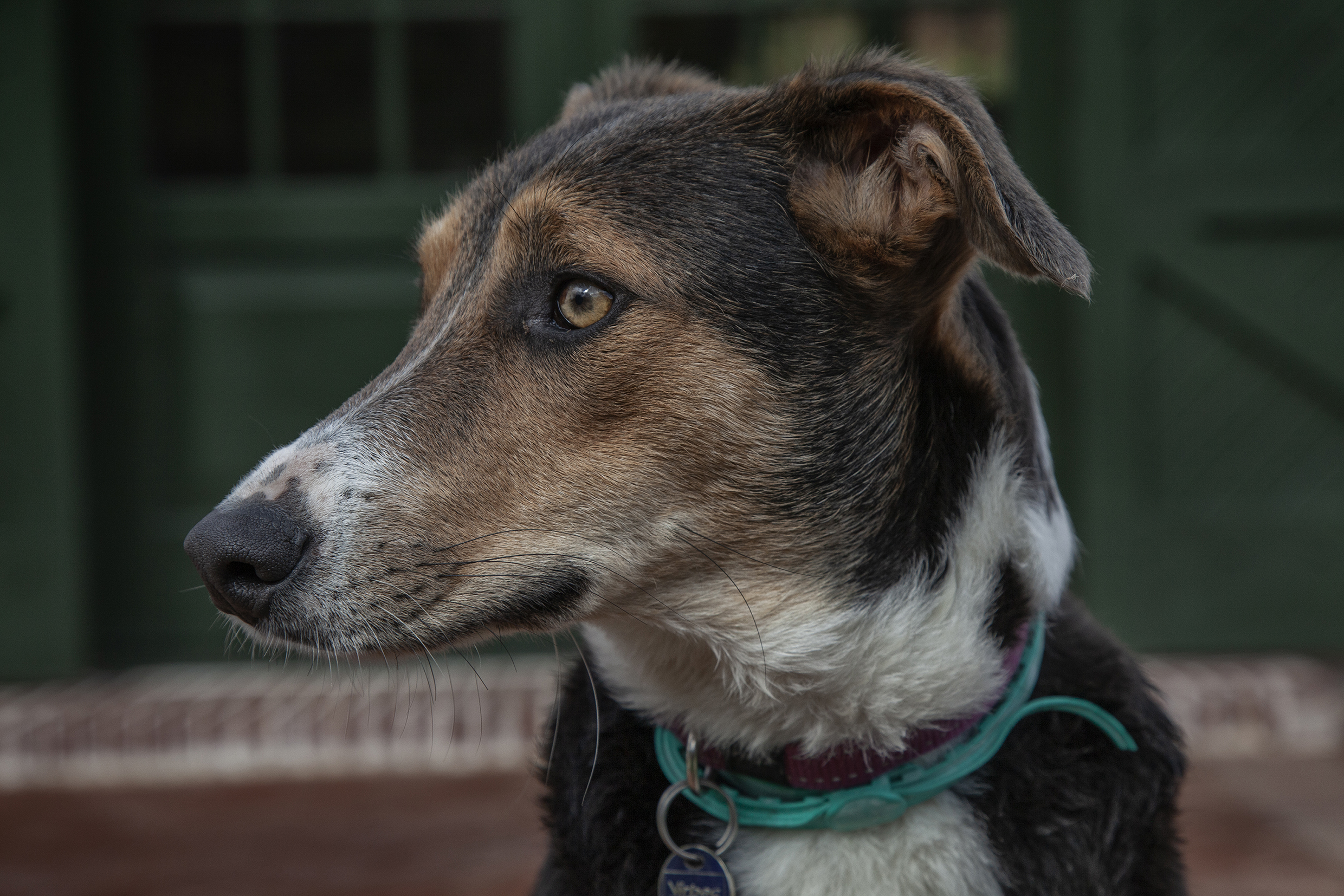 Who was Sage? She was a suspicious Khayelitsha skollie of mixed breed; found self-surviving on the township rotting streets; walking amongst the lurching drunks and the sleeping bedraggled. Stealing titbits here and there. Constantly hunting down her daily bread. Her body was scared in parts — rocks thrown to tell her to keep away. Teeth slashes in fights with animals living under the same umbrella of stagnant dread. She was suspicious. And who could blame her distrustful nature. She had travelled from foster home, to foster home for several years. Some stays lasted days. Others a few weeks; one a year. Human love never touched her in her early years. Nobody wanted her. She was a hand-me-down; not pretty to be kept, to be show-cased to the neighbours. Sage knew that. She saw other dogs glide by in fancy limousines, blushed with health.

Sage didn’t walk into happiness like a thoroughbred dog — she like all street dogs needed a bit of luck. My beautiful Sage still carried the smell of the township when she arrived in our lives — smoke, rotting food, general waste. Common sense told her love was not forthcoming and so she gave back no kisses sensing no love would ever come from her part-time owners.

To complicate her life, her looks were marred by mange. A bit of Collie. A bit of Fox Terrier. Her colouring, black, chocolate brown with white tuffs under her chin on top of four skinny legs that often skittered with the wind. Bonnie took her on as a companion for Tyson our Alsatian Retriever mix; another skollie pup dumped in a township street. They fought at first. Bonnie couldn’t cope with their differences. In the car on the way back to the dog pound, Sage rested her head on Bon’s lap. Her dark brown eyes gazed at Bonnie. Don’t send me away her eyes said — she must have hoped our home was her home. Bonnie sensed her feelings and turned the car around. That was twelve years ago. It wasn’t long before Sage and Tyson became great friends. Games were played. We were all happy. 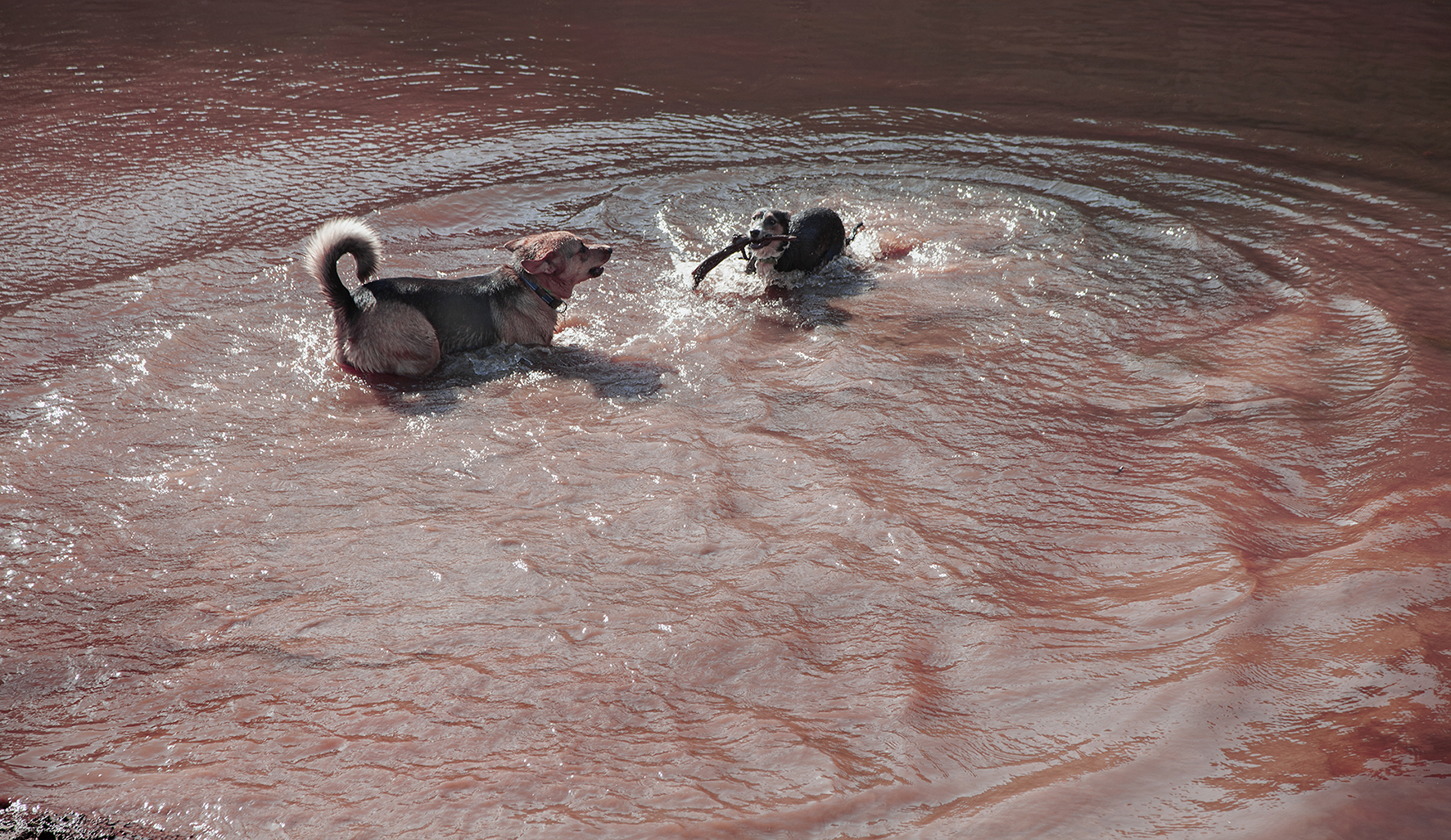 On our trips from St James to the Elgin Valley, Sage and Tyson would travel on the back seat of the bakkie sniffing the wind scents all the way there and back. Several hours of hedonistic adventure; barking at every amusement. With 11 hectares there was plenty of distractions. Chasing mongoose, squirrels, spoonbills, Hadeda’s, Blue Herons and Mallards who enjoyed the game, swimming around them in circles, playing catch me if you can; then Sage and Tyson would lie down pooped, replenishing themselves with gulps of water from the dam, before taking another charge at life. 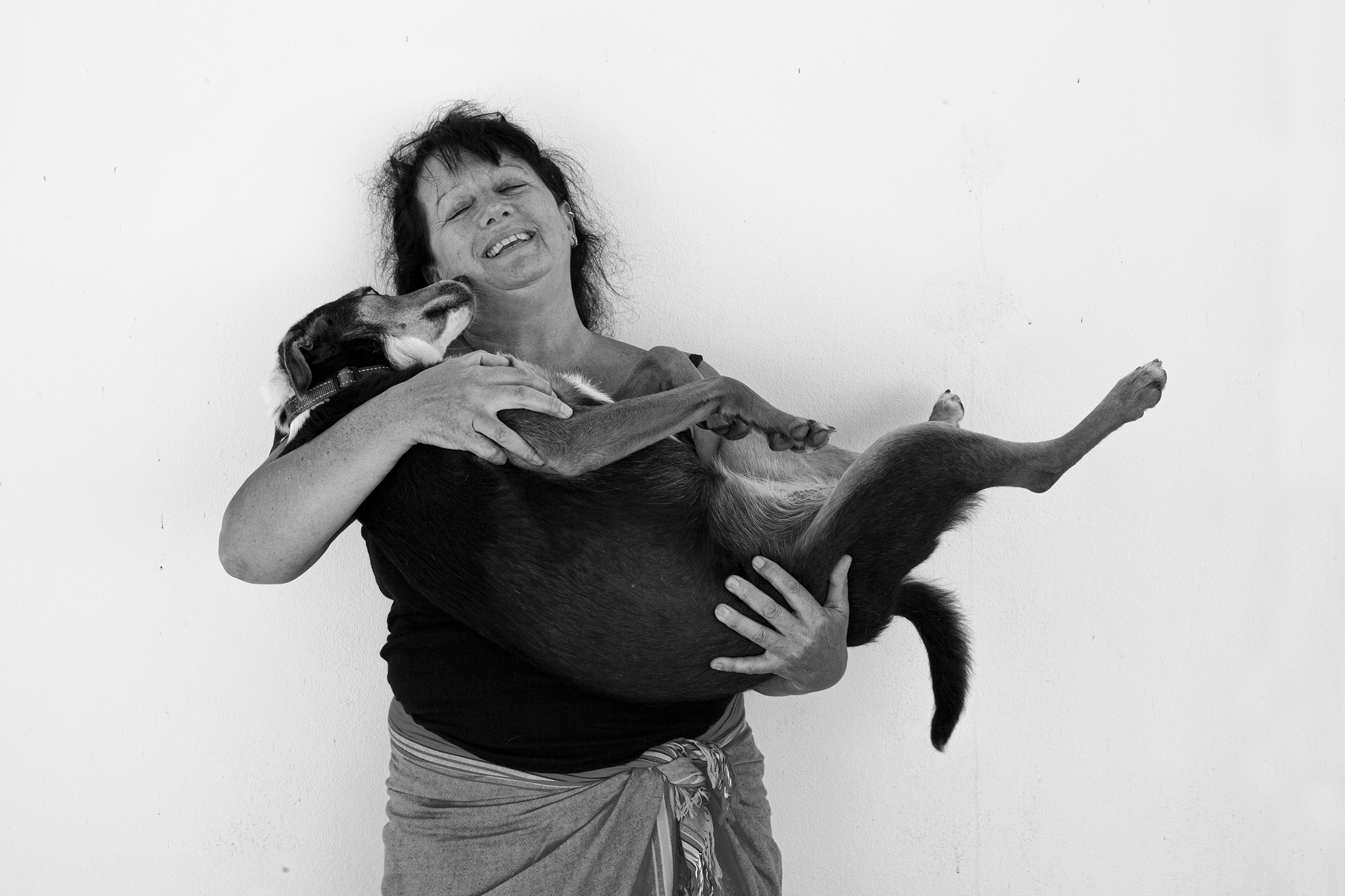 Over the years and many cuddles later Sage started to come out of her shell. Kisses started. And love was demanded. If I was watching TV, or reading a book, she wanted me to watch her; cuddle her; whisper words of love. Telling her how much I loved her. If I was talking to Bonnie, Sage wanted me to talk to her. It was irritating at times, but then I understood, she was trying to catch up her lost years of shared love.

So, I would hold her. Her soft neck fur like a fluffy woollen scarf. Feel her wet nose against my ear and her moist kisses on my face followed by her murmurs of contentment. They were like little squeaks layered with breathy groans. She was just trying to say to me — thank you for giving me a good happy life. Oh these thoughts hurt, so badly. I had to pause. Because I wanted Sage to live forever.

At night she had a ritual. When she first arrived in my life she would hop the metre onto our iron bed. Her spot was were my feet lay. I often wondered why she picked that spot. She could have slept between us, she was small enough not to cause any discomfort. Then one day, I realised that as I had gotten older my feet had become colder. Sage sensed this a long time ago. So, I guess this was her way of returning love for the happy life we gave her. On cold winter nights she was the best Eskimo socks anyone could have, although sometimes leaden. 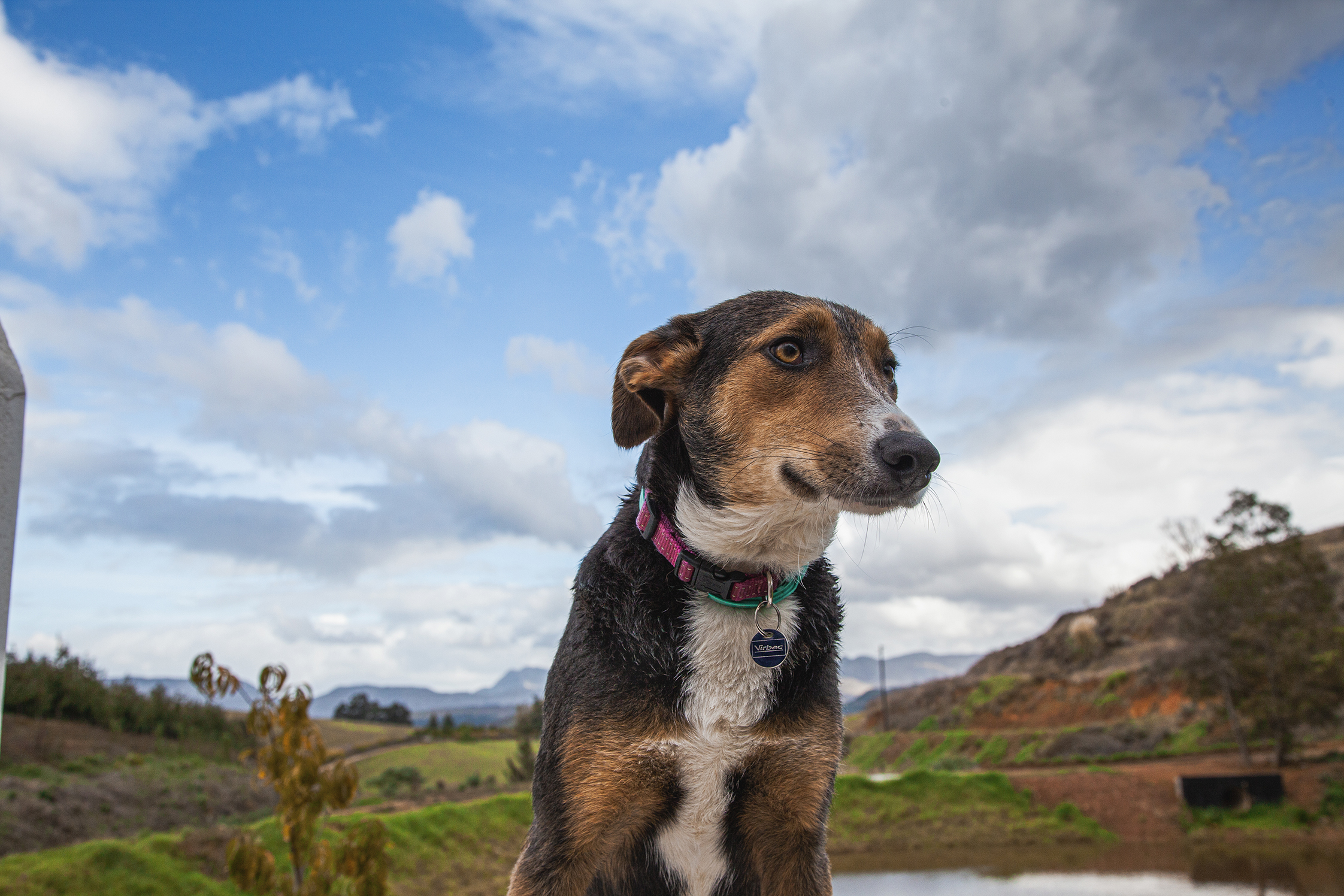 The day before she died, I thought maybe another trip in the bakkie, with her proud head poking its face out of the window as we race through the wind down Sir Lowry Pass, along the ocean air, then back home. But that day never came.

Bonnie found her ice-cold under my study desk. When I heard, “I think Sage is dead”, my thyroid plunged into my chest. Blackened Cumulus thunder clouds dropped from the skies and blackened all my senses. My heart pounded.

With the help of our neighbour’s Barry and Derrick muscular arms, they dug a hole under an Acacia tree. We buried her with a blanket, biscuits and garden flowers. Cape white sandstone rocks mark her final resting place. Bonnie and I both say hello each day. For me, I sometimes sit by her grave and tell her what the other girls and boys have been doing each day. Their habits never change. Zeus still pisses on every plant and pot in the garden. Katie groans about every walk she goes on. Her children, Kiki and Ella, still stalk bird and butterfly shadows ever sunny day. Pippa still runs around in circles, growling and biting her tail. Tyson, whose diabetic, struggles to go on walks, but finds the energy somehow to make it to the dam for his daily swim . . . well more like four legs in the water while he jiggles the wetness out of his old fur. Strangely enough, one of Tyson’s favourite day-dreaming spots is just a few feet from Sage. I suspect he knows where his old friend is. Bonnie still cooks Sage’s favourite chicken. I tell her there is an empty space in the kitchen waiting for her. It’s her spot. She was always first in the queue. 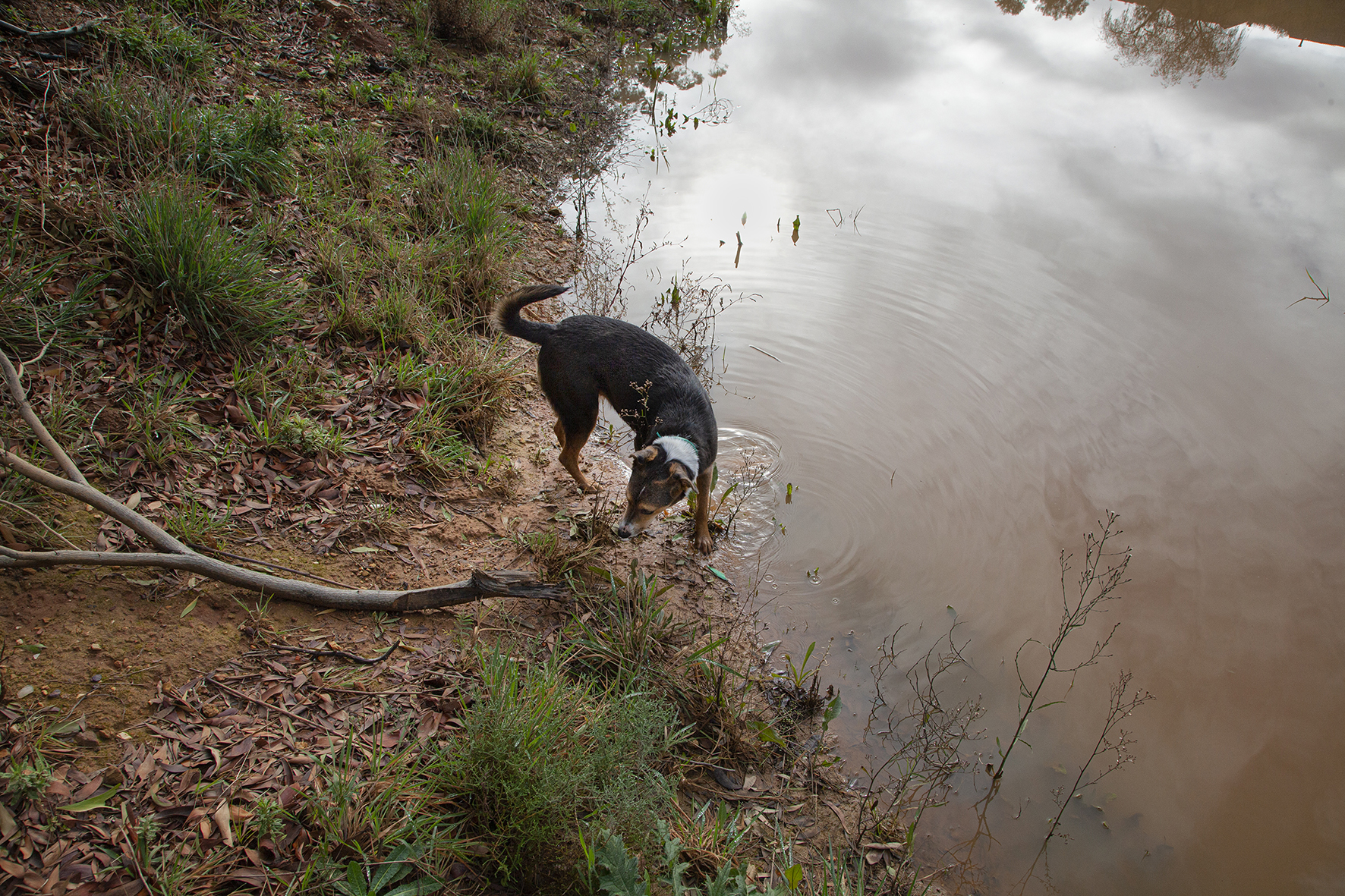 We never understood why she died so suddenly. Happy and barking in the morning. Dead by noon. And so quick. We surmised at first it was a heart attack. She went walking with Bonnie the day before. Our suspicion fell on a snake bite. Yes, I know. Horrible thought. Our assumption was confirmed the following morning when I smelt her collar — vomit. She must have convulsed terribly after the snake bite, but somehow she made it to my desk.

Sage was a warrior. She died a warrior’s death. Dogs possess up to 300 million olfactory receptors in their noses, compared to 6 million in humans. And the part of a dog’s brain that is devoted to analysing smells is about 40 times greater than ours. It is a pity her sense of smell could not warn her of the hooded reptile that stood before her. Her born in Khayelitsha attitude to life would not let her back away, until it was too late.

We all felt her loss. And regret. What if? All six dogs were maudlin for the next few days; they still are. Sometimes there’s a thoughtful silence from all six dogs. They all bow their heads to the floor in respect. Sage is always in my thoughts, often openly. I sometimes watch Tyson, his face looking melancholic. I’m sure he’s thinking of his dear friend.

If we ever get another dog, I want another skollie like Sage who should be spoiled and loved relentlessly.

God bless you Sage. See you in my next life. You’ll always be with us. 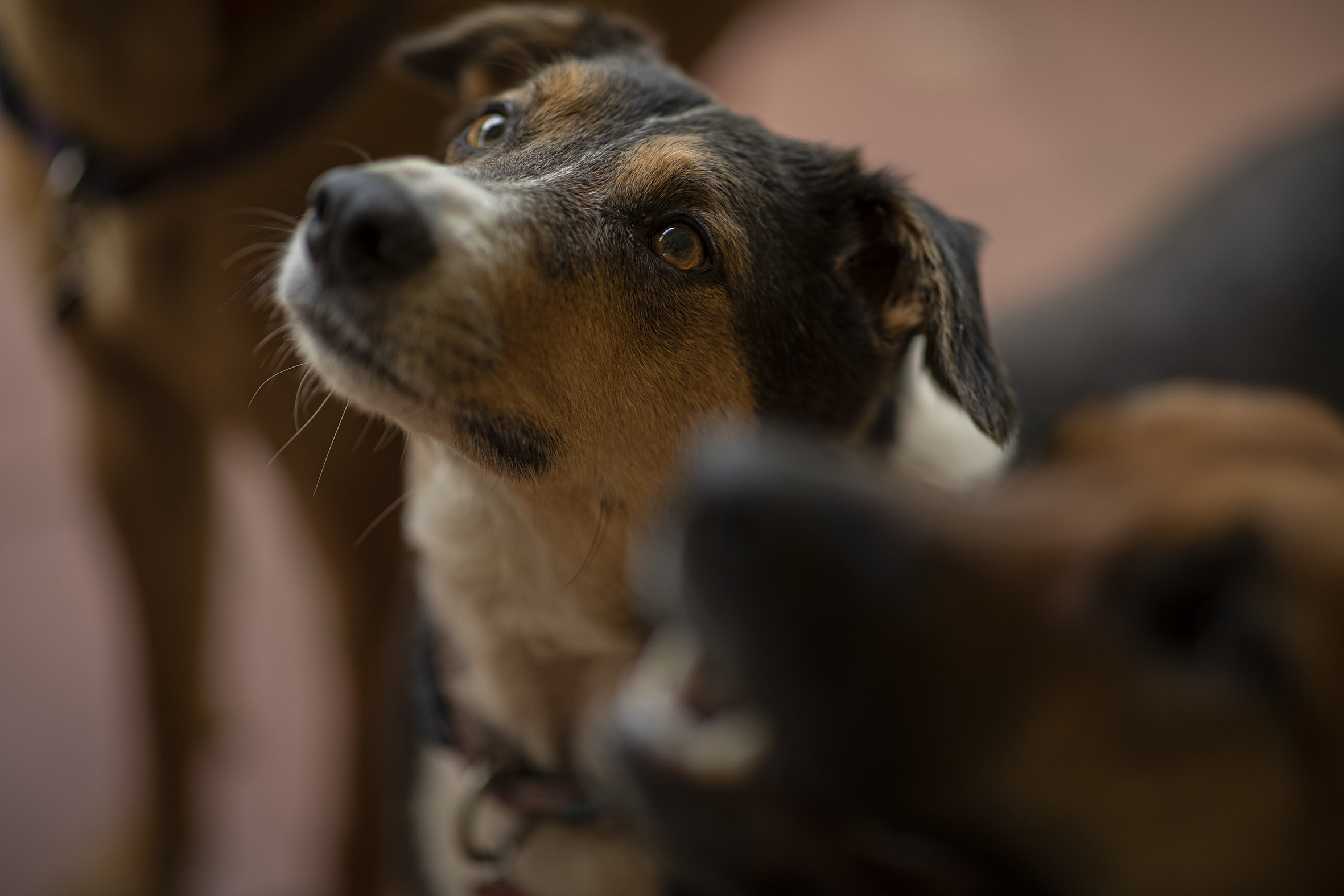